Last Wednesday was the premier screening of Flood Tide: Remixed, the live performance version of Flood Tide accompanied by a live score by Dark Dark Dark. The screening was at Socrates Sculpture Park in Long Island City and co-presented by Socrates, Rooftop Films and the Museum of the Moving Image.

It was a scorching hot day– we received at least three, “sorry, I’m not coming,” messages from people suffering from heat exhaustion. As the sun was setting, the air cooled and people began to trickle into the park, walking down to the water or laying out blankets on the grass. By the time we started playing music at 7:45 there were close to 1000 people there.

Being outdoors, on the river, just a mile from where we docked the Swimming Cities of Switchback Sea Rafts two summers ago felt so perfect– like we had somehow come full circle. The event was magical. It wasn’t only about the film or the band…it was so much about the summer night air, the dull pink light in the sky, the water, the city skyline, the sounds of traffic, the hundreds of bikes piled up in the back corner of the park, families having picnics, fireflies and so many friends.

If you were there, thank you. Let us know what you thought. And if not, we’re doing a few dates on the West Coast in September and will be back East in the spring of 2011 for more. 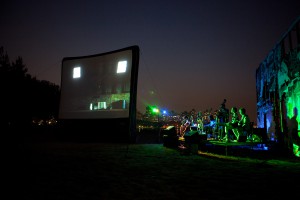